Below is the write-up of an investigation I recently conducted into the alleged sighting of an animal matching the description of a wood ape in Polk County, Texas. The incident occurred just outside the Big Sandy Creek Unit of the Big Thicket National Preserve. This area has a rich history of sightings of creatures matching the traditional description of the sasquatch.

"In the Fall of 2003, my wife and I were driving on FM 1276 near the Big Sandy Creek unit of the Big Thicket National Preserve after sunset. (It was almost fully night.) We both witnessed a bipedal animal run across the road in front of us. It was running on two legs but ran in a bent over posture with its arms near or on the pavement sometimes. It ran very quickly and well. The animal was around 5 feet in height and covered with long reddish brown hair. It had a very broad build and looked somewhat like an orangutan except that it had a flat face and was proportioned more like a human with long arms. It had entered the road in front of us from the driver's side, ran across the road, and paused briefly on the other side of the road to look at us before entering the woods. It looked at us by turning its body partially. I had braked as it entered the road and passed it just after it entered the edge of the woods."

This interview was conducted as a result of an alleged sighting of a large, upright biped that matches the description of a wood ape in Polk County, Texas in the fall of 2003. 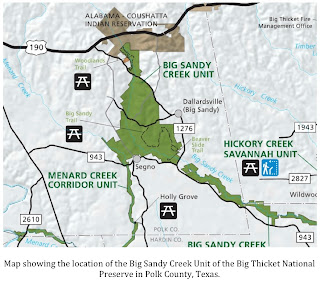 I interviewed the witness via telephone on the evening of Tuesday, February 26, 2013. The witness was friendly, open and cooperative. The wife of the reporting witness also participated in the interview as she too saw the animal in question while riding with her husband in 2003. For the purposes of this report the husband will be referred to as witness #1 and the wife as witness #2.

The couple was driving southbound on FM 1276 near the Big Sandy Creek Unit of the Big Thicket National Preserve just after sunset. Witness #1 did not recall the exact time but noted that it was almost fully dark. As their vehicle approached a slight bend in the road, witness #1, who was driving, caught sight of movement on the left side of the road. He described seeing something moving quickly toward the road. Witness #1 said there was an open field bound by a barbed-wire fence at this spot and, while he could not be positive, said he felt the figure had jumped over the fence “like a hurdler” based on how it was moving/landing when he first caught site of it. Witness #1 also felt this was a strong possibility since the figure was moving very quickly and he does not believe anyone, or anything, could have generated that much speed from a standing position so close to the road if they were not already running all out. Witness #1 slowed his vehicle immediately as it became clear the figure’s momentum was going to carry it into his path. Witness #1 recalled seeing the figure clear a ditch and come onto the paved shoulder of the road in a bipedal fashion. Upon reaching the paved portion of the road, the figure dropped down and quickly crossed in front of the vehicle on all fours. Witness #1 said the figure actually seemed to pick up speed after it dropped down to all fours. He noted that the hands—witness #1 did consciously use the word “hands”—really only touched the ground “a couple of times” as the figure smoothly crossed the road (see also TBRC Liberty County report 01040029). By this point witness #1 had slowed to almost a complete stop. The figure continued off the pavement onto the other side of the road and paused just outside the wood line. It was at this point that witness #2, riding on the passenger side of the front seat of the vehicle, got her first good look at the subject. According to the pair, the subject squatted briefly and turned back to look at their vehicle. It then stood up and walked on two legs into the woods.

The pair described the figure they saw in similar terms. Both agreed that it likely was no more than about five feet tall and covered in reddish-brown hair. Witness #1 described the hair as being “the same color as an orangutan.” He specifically remembered the hair being very long and hanging down from, the arms of the figure. The build of the figure was described as stocky and muscular. The witnesses agreed that the head of the figure was somewhat pointed and that it had a “tall forehead.” The couple did get a brief look at the face of the figure when it turned back to look at them and said it was human-like. When asked what was “human-like” about the face, the witnesses specifically mentioned the nose. The observers described the nose as flat and wide and “not like a gorilla.” Witness #1 expounded on that point a bit more, saying, “You know how you can look at a gorilla’s face and look right into the nostrils? This wasn’t like that. It was like a person’s nose but wide and flat.” Both witnesses insisted there was no hint of a snout of any kind.

Witness #1 said that the locomotion of the figure was very smooth and impressively fast. He said the speed of the figure was comparable to that of a deer running across the road. Witness #1 also wanted to stress that the figure seemed to speed up when it dropped to all fours and that it didn’t “bound” across the road like a chimpanzee or gorilla would. It stayed low and moved smoothly with no “bouncing.” The bipedal movement was described in much the same way: smooth and quick. When asked if the figure they saw could have been a cinnamon-colored black bear, witness #1 politely, but very firmly, said, “No.” He stressed that when the figure stood up and walked on two legs it did not move like a bear on two legs and it had a good stride without any side to side “wobble.”

The witnesses both agreed that when the figure squatted down and turned back to look at them that it was, “stiff-necked.” It turned its entire upper torso back toward the road when it peeked back at the vehicle. At this point, both witnesses recalled seeing very bright eye-shine. Witness #1 did not recall the color but remembered seeing the eye-shine very clearly. Witness #2, who was sitting on the passenger side of the vehicle closest to the animal when it turned to look at them, recalled the shine being a very bright “yellowish” color. Witness #1 was impressed by the bright shine as by this time they had pulled even with the figure and it was no longer being completely illuminated by the headlights of the vehicle.

Witness #1 added that two more people in the community, including his own father, claimed to have seen a figure matching the same description within two weeks of his encounter. To the best of his knowledge, no one in the community has seen anything similar since then.

Witness #1 grew up in the area and has hunted and hiked the woods, including the Big Sandy Creek Unit of the Big Thicket National Preserve, all of his life. He is familiar with the known fauna in the area. He claims he has never seen anything before, or since, like what saw on that fall night back in 2003. 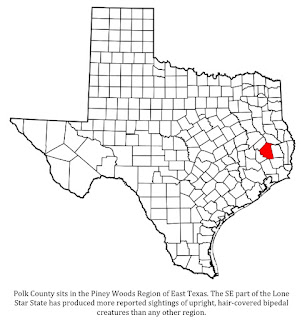 I did not detect any signs of deception on the part of either witness during the course of the interview. Going into the interview, I felt it was possible the couple had encountered a cinnamon-colored black bear. Black bears are native to the area in question and, though all but extirpated from the region for the better part of the last seventy-five years, have been making a comeback of late. After thoroughly discussing the possibility of a misidentified bear with the witnesses, I feel satisfied that what they encountered in 2003 was not a bear. The smooth transition from bipedal locomotion to quadrupedal locomotion and back again along with the witnesses’ adamant assertion that the figure they saw had a nose and not a snout has convinced me of this. This description of the figure’s appearance and modes of locomotion would also seem to eliminate the possibility that any of the region’s other known wildlife was seen and misidentified.

The TBRC continues to collect and investigate reports of encounters—both contemporary and historical—with strange, bipedal, ape-like creatures in Polk County and surrounding Big Thicket Counties. This part of Southeast Texas continues to make up the most prolific region in the four-state area for reports of encounters with creatures fitting the traditional description of the wood ape or sasquatch.

*Visit the TBRC website for details on many more sightings in Texas, Louisiana, Arkansas, and Oklahoma.