I was finally able to get out and check my game cameras here in Bell County this past weekend. I was over a week past due on checking them due to inclement weather and a bad cold. I have to admit that I’m a huge sissy when it comes to colds. Any sort of injury I can handle ok. Sprains, strains, contusions, broken bones…I’ll handle them. A bad cold? I’m done. In any case, the skies cleared up, the water ran off, and I started to feel better so I got out and got it done this past weekend. I’m glad I did. 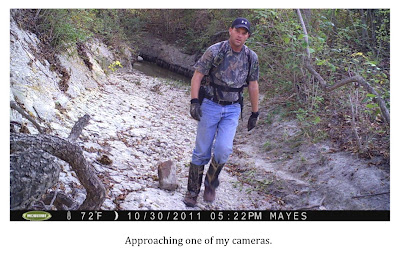 I again failed to capture an image of the mountain lion(s) that have, until recently, been spotted on a regular basis in eastern Bell County. Even so, I was able to retrieve more than 700 quality images from 3 of the 4 cameras. I say 3 of 4 because the bungee chord holding up one of my two Cuddeback cameras snapped shortly after deployment. I have a security chain on the camera that kept it from falling into the creek bed but it did fall down to the base of the tree and somehow got twisted so that it faced the trunk. So, nothing of value was captured on that camera. The other three cameras (Cuddeback Excite, Moultrie M80 GameSpy, Wildgame Innovations IR2) all performed very well.

The Moultrie captured a few interesting videos as well as getting some nice photos. At some point, the camera was twisted and shaken by an unseen animal. I’m guessing it was a raccoon. Easily 2/3 of the pictures taken were of raccoons which makes one of them a likely culprit. I would add that this is exactly the sort of video some people would put forth as evidence of a sasquatch tampering with the camera. Many would say no other animal was capable of shaking and shifting the camera in such a manner. So, keep my little video example here in mind the next time you see a similiar clip and it is offered as indisputable evidence of sasquatch behavior.

Despite the camera being shifted and moved around it continued to get some nice shots. 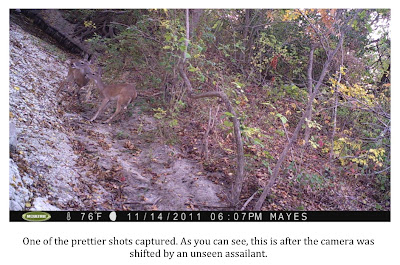 This camera is programmed so that when triggered it snaps a photo. It then immediately begins taking video. One video was a great insight into the behavior of whitetail deer during the rut. The camera captures a fully airborne doe leaping into the creek as if something was chasing her. The video, which started immediately after the photo was taken, shows a buck trot up, sniff the air, and then proceed to follow the object of his desire. Whether she ever decided to cooperate or not I cannot say but the video is exactly the sort of “behind the scenes” look you can get with a game camera. I love seeing clips of even the most common animals behaving naturally. I find it fascinating. 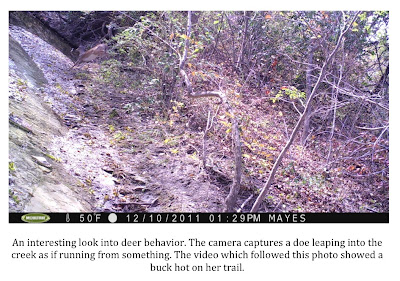 The Wildgame Innovations IR2 is easily the least expensive camera I have in the field. It actually performs pretty well. The photos it takes during daylight hours are very, very good. The nighttime shots, when most of the action takes place, are, unfortunately, not nearly as sharp. The sensor detects movement at an acceptable range but the flash is too weak to light these targets up sufficiently. The result tends to be shots that are murky and not sharp if the subject is on the periphery of the sensor range or washed out images if the subject is close to the camera. 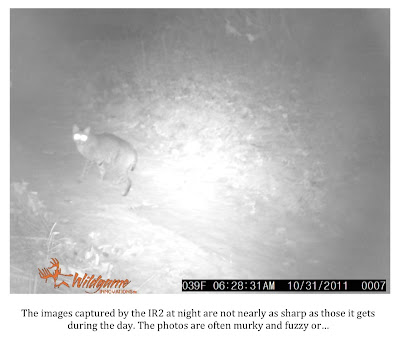 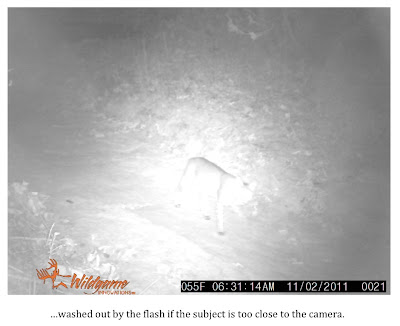 I was especially pleased with the performance of the second Cuddeback Excite camera. As I’ve mentioned before, this is an old veteran of the TBRC’s Operation Forest Vigil. It has been an old warhorse for a long time now. One of the great things about this camera is that it takes color photos at night. This capability produced one of my favorite shots of the set when it captured an unusually reddish-colored coyote. He is quite striking and his coloration stands out starkly when compared to a more typically colored coyote that was also photographed. 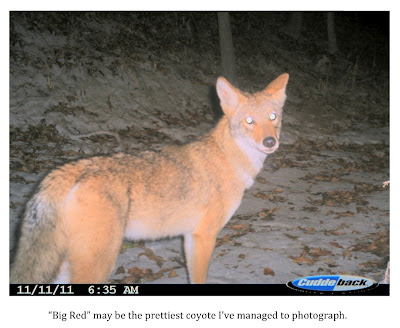 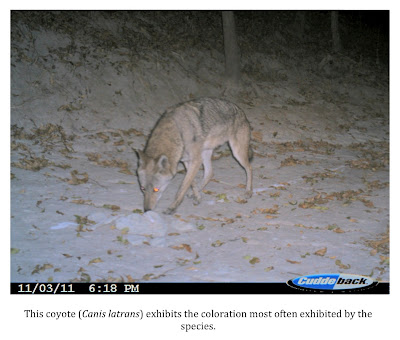 The Cuddeback captured the widest variety of animals of any of the three cameras this time around. Included were the pictures below showing a black opossum and a striking bobcat with a very leopard-like coat. 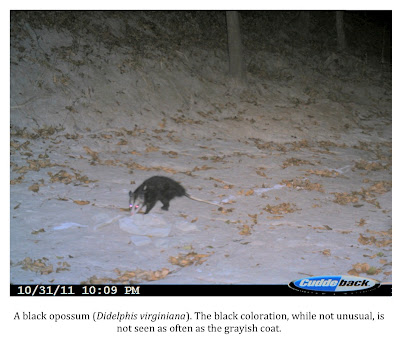 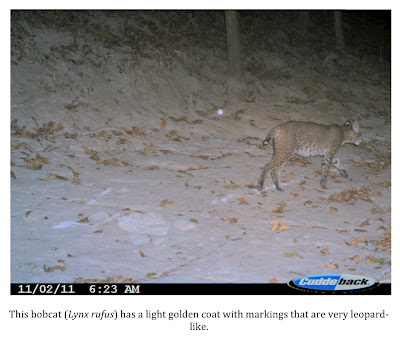 The jewel of the set, however, was a photo of two river otters. This is one species I was not expecting to see. The creek bed where I have placed my cameras is not a live creek but a run-off creek. It is dry most of the time. That being the case, I would not expect otters to be present. The Mammals of Texas – Online Edition says:

“River otters are largely aquatic and frequent lakes and the larger streams. In the Gulf Coast region, marshes, bayous, and brackish inlets afford suitable range. Presently known only from the eastern one-fourth of the state in major watersheds: probably extirpated from the Panhandle, north-central, and southern Texas.” 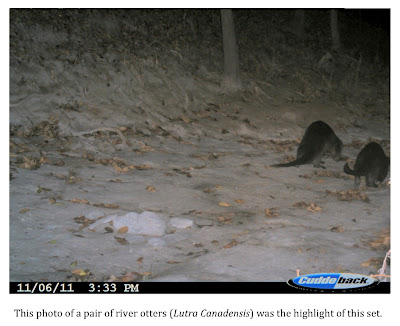 I checked the distribution map provided as well and found that, according to known county records, no river otters have ever been documented in Bell County. 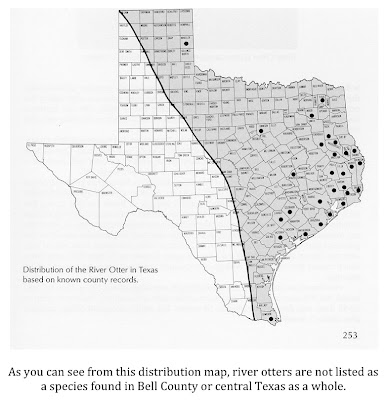 All of this being the case, I got very excited about this photo. Could these be the first river otters ever documented in Bell County, Texas? Short of that, could this photo prove that otters, once extirpated from central Texas, be rebounding? Well, maybe. I have been informed that unless an actual specimen has been taken from a county, a species is not considered “documented” there. In other words, river otters may have been seen, possibly even photographed, in Bell County before but since no one has trapped or shot one and presented the body as proof to the Texas Parks & Wildlife Department the species is not considered to be present.

I submitted the photo to several biologists who all have confirmed that the subjects in the photo are river otters. I also sent an email to the Texas Parks & Wildlife Department explaining that I had a photo of river otters taken in Bell County and asked if they wanted to view the photo. I sent the email Sunday night. It is now Wednesday night and I’ve heard nothing back from them as of yet. If I don’t hear back from them in the next couple of days I’ll contact the local office in Temple.

Regardless of whether this photo will officially “document” otters in Bell County, I feel very fortunate to have captured it. Otters, at best, are very rare in this part of the state and I think it is an incredibly cool addition to my wildlife photo collection.

There was some bad news. The Cuddeback that took these great shots was a victim of rising water after several storms blew through the area a couple of weeks ago. The camera was never completely submerged but some moisture did get into the camera causing the lens to fog up. While the camera still showed power, no photos were taken after the flooding event. I feel very fortunate that the compact flash card was not ruined. Currently, I am attempting to dry the camera out. Once it is dry and cleaned of mud I’m hopeful it will continue to function.

Even though the big prize that would be a mountain lion photo eluded me again, I feel very good about this last set of photos. I remain hopeful that I will eventually get a shot of one of these big cats. Even if I don’t the otter photograph proves that you just never know what you might get a picture of if you are patient and allow cameras to sit undisturbed for long periods of time. I’m due to check the cameras again in 4-5 weeks.