I recently posted several new accounts sent in by readers that detailed sightings of black panthers from several areas around the state. A regular reader, Justin Horn, contacted me and volunteered to scout the area near the Dallas water treatment facility in Sunnyvale, just north of Mesquite, where a reader reported seeing a large black cat back in 2008. His report, along with several photos, he took, follows.

Earlier today, I went to check out that area where the alleged black panther sighting took place, In Mesquite, TX. As I mentioned earlier, I'm quite familiar with that area, as many years ago I lived in Mesquite. I just wanted to touch base with you and fill you in on the day's events. 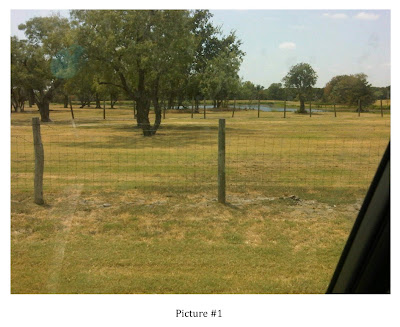 I want to start by saying, I'm sure my "investigation" methods are sloppy, as I don't have a particular protocol for things like that, as you do with TBRC. I wasn't out to try and spot a cougar, as that sighting was 4 years ago (although it would have been nice to spot one!). I basically just wanted to do some basic recon of the area and give my opinion as to whether or not that area would be conducive to supporting a large predator like a mountain lion. The conclusion I came to is: Yes..... sorta. 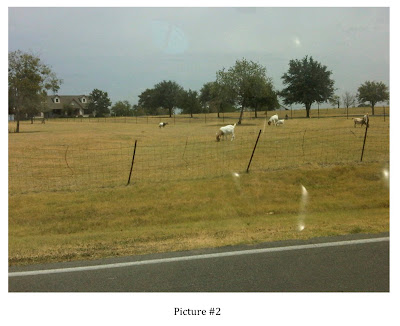 First of all, despite only being 15 miles from downtown Dallas, the area is fairly rural. There are large tracks of heavily forested land, butting up to even larger tracks of clear cut farm land. A few large new development neighborhoods are interspersed throughout the area, but are generally surrounded on all sides by thick woods and farmland that stretches for miles. The area is abundant with wooded creeks, stock tanks, and smaller lakes. The East Fork of the Trinity River runs through the area, as well. A very large lake, Lake Ray Hubbard, is only about a mile and a half from this location. There are many food sources in the area, as even in these dry conditions, evidence of abundant wildlife was present. Not to mention, many of the farmers in the area have cattle, horses, miniature horses, goats, and sheep. An interesting note: DIRECTLY across the street from where the sighting occurred, there is a farm of miniature horses and goats, without any high fences, donkeys, or large dogs to help ward off predators. Seems ill advised if you ask me. It could be that this cat was drawn to the area by the easily accessible goats and miniature horses. 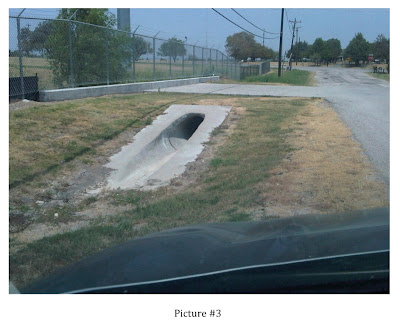 I included some pictures to help you get a feel for the type of land in the area. Unfortunately, the camera on my Blackberry does not at all capture the size of the trees or the thickness of the woods in many areas quite like it should. 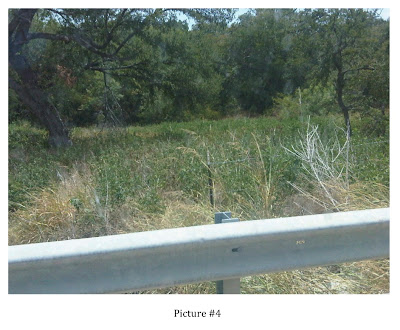 Photo number 1 is a picture of a farmstead in the immediate vicinity. Photo #2 is of the goats directly across the road. Photo #3 is I'm going to guess is the large "pipe" the animal came out of, as it is the only one near the water treatment plant (and yes... the road is still full of potholes). This pipe, as you can see if you enlarge the picture, is less than 100 yards from the goats!. Photo #4 is most likely the area the animal retreated to. Heavily wooded, a creek flows through it, and there's nearly 1/2 a mile of woods before it meets the road again. The road is just a 2 lane road, and then on the other side of that road is a vast expanse of undeveloped woods. Photo#5 is where that expanse begins, and as you can see, more water there. Photo #6 is just about a half mile further down the road, where there are many ponds, and is apparently some type of catfish hatchery. That area brings all kinds of animals to the yard. I briefly took a look around for any sign of animals. I saw pig tracks and deer tracks, as well as all kinds of smaller game tracks, and of course... good ol coyote tracks. This was all in about a 20 ft area, let alone what all could have possibly been seen if I had ventured further onto the land and into the woods. I didn't take many pictures of the tracks, because I was in a hurry to get off of that land, but photo 7 shows some raccoon tracks intermingling with a few other animals, and photo 8 show's some coyote tracks. 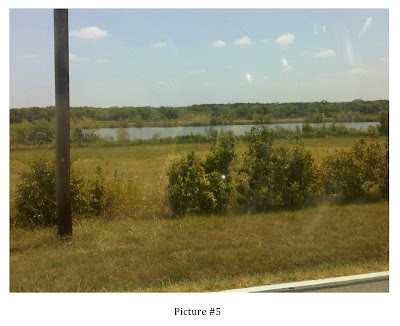 All in all, from everything I saw I do believe it is very possible for a large predator... or even several of them, to occasionally call this part of DFW home. I'm not necessarily convinced that cougars could permanently take up residence here, as a long term breeding population of a predator of that size would no doubt decimate it's food sources after awhile. However, cougars could go in and out of this area, undetected, with virtual ease. Even when highways might cut through an area, the creeks, and even the Trinity River, itself, would provide plenty of.... "highways," if you will, to the next big track of land. 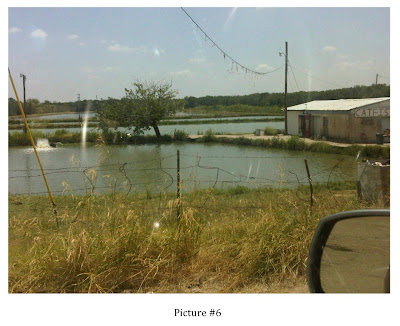 Furthermore, driving around the back roads for several hours in this area, I was able to follow large undeveloped areas (not even counting the river), that go virtually uninterrupted between there and deep into Kaufman Co. From there, there's nothing but woods and farmland standing between them and deep east Texas. It would not surprise me at all if animals were able to travel between this area, all the way to the extreme eastern edges of the state if they were so inclined. In fact, if you look at areal satellite pictures of the area on Google, you can see if you travel in a southeasterly direction, animals have basically a large clear path to east Texas. 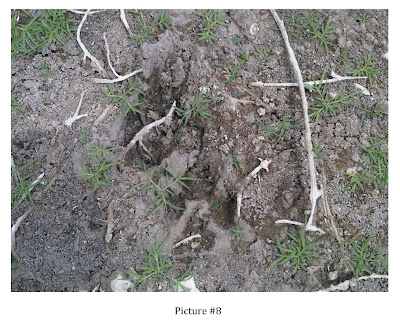 Lastly, just a couple of interesting side notes, following the river, these animals could easily get to the Great Trinity Forest, literally thousands of acres of land near Downtown Dallas (of which the city has only purchased about 2000 acres). I have a friend who works in the dump there in the middle of that forest and claims they see bobcats and mountain lions pretty regularly. Also, if you remember that story I sent you a few months back about Bois D'arc Island in Dallas county, where bears and panthers were plentiful... Well that area is just about 5 miles down the road... and you guessed it --- nothing but farmland, sloughs, and woods between there and where the sighting occurred.

Someday I'd love to take some time and go knock on the doors of some locals around there area to ask what, if anything, they've seen in the way of wildcats.

Anyway... thanks for reading my book! lol Hope this information was at least somewhat helpful and entertaining. Keep up the good work!

I would like to thank Justin for taking the time to go and check the area out. I simply cannot get out and follow up on all the reports that come in to me. I really appreciate the help Justin provided on this one and think he did an outstanding job.