A new species of giant crayfish has been discovered in Tennessee. Yahoo News has posted a story by Reuters that documents the discovery.

The new species, dubbed Barbicambarus simmonsi, was found under the largest rocks in the deepest parts of a well-explored Tennessee creek and proves that there are still undiscovered animals to be documented right here in the U.S. The new species is easily twice as large as any other crayfish found in North America. Scientists are a bit baffled as to how these crayfish remained undiscovered for so long. 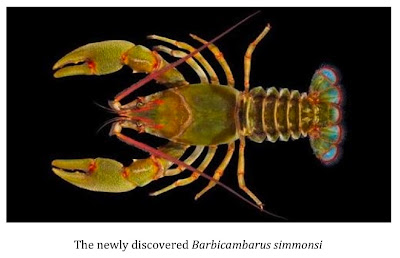 "This isn't a crayfish that someone would have picked up and just said, 'Oh, it's another crayfish,' and put it back," said Univesity of Illinois aquatic biologist Chris Taylor, one of the researchers.

"You would have recognized it as something really, really different and you would have saved it," said Taylor. He added, "This thing had not been seen by scientific eyes until last year."

Scientists first became aware a giant type of crayfish might exist in the area when a local man sent Eastern Kentucky University biologist Guenter Schuster photographs of a giant crayfish he found along the banks of Shoal Creek. Initially, it was assumed the photo was of an unusually large specimen of the known species Barbicambarus cornutus; a crayfish that can grow to be lobster-sized. The extraordinary size of the crayfish in the photo and the fact that the specimen was found in Tennessee, far north of the recognized home range of Barbicambarus cornutus, piqued the interest of researchers. When they learned that a Tennessee Valley Authority scientist had discovered a similar specimen just a few miles from the site where the photo was taken they decided to investigate themselves. Two specimens were discovered the first day of searching.

Alasdair Wilkins, the author of an article documenting this discovery on the io9.com website added the personal comment below in his write-up:

"It's very rare to find a completely new species that's this big and distinctive, particularly in a well-studied part of the United States that has been under pretty much constant academic investigation for the last fifty years. Cryptozoologists might want to savor this moment - this is probably the closest real scientific equivalent to finding mythical creatures like Bigfoot or the Loch Ness Monster that they're ever going to get."

I don't understand how Mr. Wilkins can be so sure of that. I would be willing to bet that he would have scoffed at the notion of a giant crayfish just one week ago. I will be the first to admit that there is a big difference between an aquatic lobster-sized crayfish being able to remain hidden and undiscovered and a large upright hominid, like the sasquatch, being able to do the same. If there is one thing I have learned, however, it is that nature is full of surprises.

I prefer to give the final word to Guenter Schuster who said, " We spend millions of dollars every year on federal grants to send biologists to the Amazon, to Southeast Asia -- all over the world looking for and studying the biodiversity of those regions but the irony is that there's very little money that is actually spent in our own country to do the same thing. And there are still lots of areas right here in the U.S. that need to be explored."

Schuster makes a great point. If our universities, museums, and government would spend some of that grant money in our own backyard...well, there is just no telling what they might find.
Posted by Mike at 1:11 PM