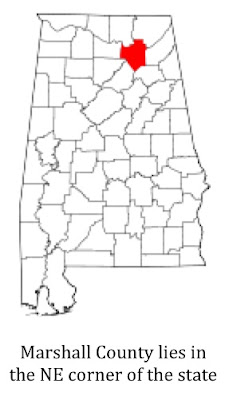 The Times-Daily, published in Florence, Alabama printed the following Associated Press report of the incident:

UNION GROVE, Ala. - An Alabama man says he's recovering after being attacked by a panther near his Marshall County home.

Frank Harmes says he was walking his dog in a cove behind his home near Morgan City when he heard something behind him and turned to see a black panther.

Harmes says he moved to try to scare the panther away, but instead it attacked and clawed his leg. He says he stabbed the animal twice with a knife and it ran away.

Residents of the area have reported seeing panthers in the past, saying they sometimes come out looking for food.

Harmes says he will undergo a series of rabies shots because of the attack.


In the article it is clearly stated that Frank Harmes saw, and was attacked by, a black panther. The AP article shows Alabama television station WHNT as its source. A quick check of the WHNT site does say a black panther was the attacker.

The story doesn't end there, however, as there are conflicting reports out there as to the color of the big cat in question. Television station WSFA covered the story and reports a tawny colored panther was the culprit. In fact, they quote the victim, Frank Harmes directly. According to WSFA, Harmes said, "It was a Florida panther. The tan ones that have white spots around the whiskers." 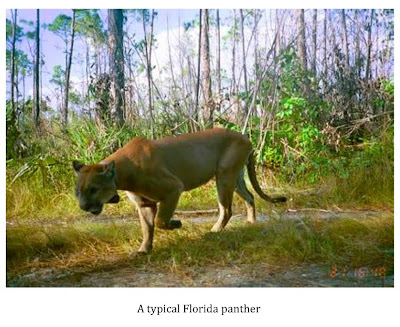 The WSFA article said that neighbors backed up the claim that there are cougars in the area. Douglas Mason, who lives in the area said he saw a tan cougar on his back porch a year ago. Interestingly, Mason added, "There was a black one with it and it was eating cat food, too."

A third Alabama television station , WKRG, documents the incident briefly with a short article that says Harmes "turned to see a black panther."

So what is the deal here? Was it a black panther or a tawny colored cat? How can Frank Harmes be quoted as saying the animal that attacked him was a tawny colored Florida panther and also be quoted as saying it was a black panther? I located a video at, of all places, the Weather Channel website. It features Frank Harmes telling his story. At no point does he mention the cat that attacked him being black. It seems odd to me that he would not mention that detail. The video report does feature a grayish looking cougar caught on a game camera. According to the date visible on the picture it was taken back in 2006. The narrator says the photo was taken in the same area where Mr. Harmes had his confrontation. 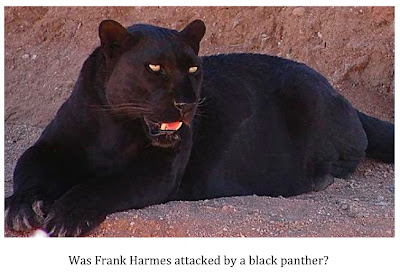 This is an interesting story regardless of the color of the cat involved for various reasons. A Florida panther (Puma concolor coryi) in Alabama would be big news in wildlife circles as these cats are critically endangered. Even if it was the more commonly distributed North American mountain lion (Puma concolor couguar) it would be news. Like Texas officials, Alabama wildlife personnel are commonly quoted as saying these big cats are not present in their state. I can hear the "it's an escaped pet" line being spoken already. If it turns out to be a wild cougar it could point to a breeding population in the state. Again, that would be big news. If it truly was a large melanistic cat then the story is huge for obvious reasons.

One of the more interesting aspects of this story actually deals with a response to it by a reader of the Cryptomundo website. Loren Coleman posted the AP story at the site. A reader replied with the following:

David-Australia questions “what is meant by the term “Black Panther” in North America”??

In reality, Black Panthers continue to be a mystery to both veteran field researchers as well as state & federal wildlife officials who have been & are in constant denial of their presence for decades.

Yet Black Panther sightings continue to generate intense interest with the American Public as well as the 40% of wildlife sceintists who actually believe “large black cats exceeding 50 pounds or more ARE definitely roaming various regions of the U.S”.
A few BLACK cougars (pumas) have been caught on film in Central & South America.
1 Black adult Jaguar was caught on a trail camera in northern Mexico in October, 45 miles south of the Rio Grande River & the Texas Border. This was the 1st time a Black Jaguar was filmed so close to any U.S. Border…resulting in this question: Have Black jaguars moved into the U.S.?? and 2) Could black jaguars be mistaken for black cougar & be a “Black Panther”??

Since I am the Director of the Eastern Puma Research Network in the Potomac Highlands of West Virginia, here are some statistics people should be made aware of:
23% of all big cat sightings reported to us in states east of the Mississippi River are of large BLACK CATS with estimated weights exceeding 65 pounds.
12-15% of witnesses are professionals with college/university backgrounds as teachers, while another 20% are trained observers with wildlife, forestry management or law enforcement backgrounds, meaning they are witnesses who know what animal they are seeing.

Documented reports from the files of the Eastern Puma Research Network were featured on History Channel’s MonsterQuest Documentary Series in 2007. 1 primary report showed a large BLACK CAT, we referred to as a Black Panther, seen & filmed by a Pennsylvania deputy law enforcement officer in November 1978. The set of 3 pictures were filmed from a distance of 1,000 feet, making it vitually impossible to see a ordinary housecat from such a great distance, as several skeptics & the PGC critics claimed.
If you have a black housecat, try it for yourself with a camera…see if you can locate your cat at such a great distance..

I find this very interesting. I don't know where he gets his statistics or how accurate they may be but his organization is legitimate. 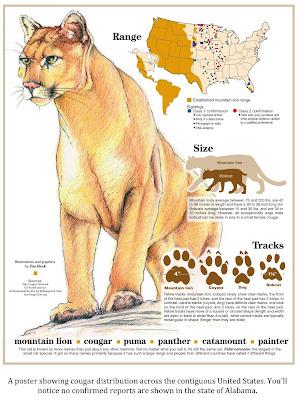 Alabama wildlife officials are going to have to look for this cat. Frank Harmes claims to have stabbed it twice during the attack. If the animal was not mortally wounded it is going to be in a nasty state of mind and a danger to anyone that crosses it's path. If it is injured to the degree it cannot hunt effectively then the danger to humans increases exponentially.

It seems to be a safe assumption that Frank Harmes had a run-in with a big cat of some kind. Was it black? According to Harmes on two different pieces of video that answer is no. Did he initially say the cat was black and change his mind? I don't know.

It will be interesting to see how it all plays out. Stay tuned...
Posted by Mike at 4:15 PM