Ocelot or Something Else?

When is an ocelot not an ocelot? The possible answer? When it is a hybrid breed of cat created by humans.

Below is a photo of a cat in an East Texas animal shelter. The person who shared it with me asked me if I thought it might be the result of cross between an ocelot and a domestic cat. I don't think this cat is the result of an ocelot/domestic cat union; however, the markings on this specimen are very unique. I can't recall having seen one that looks quite like this before. 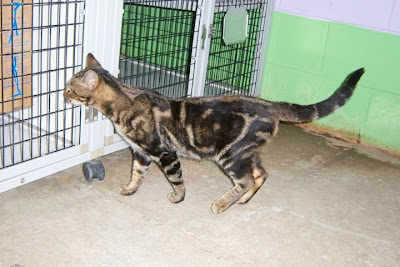 The ocelot (Leopardus pardalis) does inhabit Texas and this cat's markings are a bit reminiscent of one; however, a hook-up with a domestic cat is highly unlikely. The size difference alone would seem to prohibit such a union. The ocelot ranges from 25-40 inches in length (not counting a 10-18 inch long tail) and typically weighs in at a healthy 20-25 pounds. I just don't see it happening. 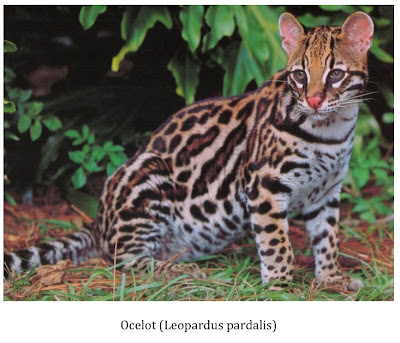 The cat in the picture also reminds me a bit of a Margay (Leopardus wiedii). The margay is native to South and Central America. It is the size of a house cat averaging 5-9 lbs. and usually measuring somewhere between 20-30 inches in length. A union with a domestic cat would not be so far-fetched to me except for the fact that their home range is so far away. I did a bit of research and learned some pretty interesting things regarding some semi-exotic cats that are being bred and sold in the U.S. The cat that most closely resembles the cat in the shelter photos is a Bengal Cat. The Bengal Cat first appeared around 1889 and is the result of a cross between a domestic feline and an Asian Leopard Cat. The Bengal Cat is quite striking and looks a lot like the cat in the shelter photo. Another breed that resembles the cat in the shelter is the Serengeti Cat, a cross between a Bengal Cat and a Siamese, meant to mimic the look of an African Serval.I'll be the first to admit that I have no idea if the shelter cat falls into one of these two categories or if it is just an especially unique domestic of some kind. 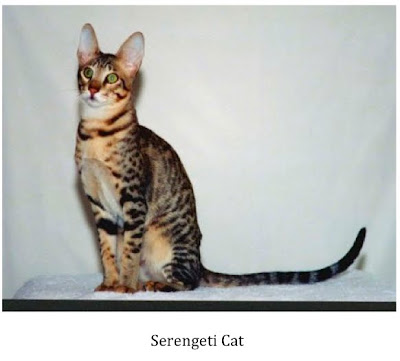 While looking into all this I started to wonder just how common these hybrid breeds have become. If they have become common and are relatively inexpensive it isn't too far-fetched to think some may have been dumped by or wandered away from their owners and become feral. If so, these hybrids are going to cause a lot of confusion to locals and wildlife biologists who are trying to keep track of ocelot populations in this and other states.

If there are any readers out there that are knowledgeable about how common these breeds are, average price, etc. I would very much like to hear from you. I would like to know if there are enough of these hybrid cats out there to reasonably consider them as a possibility when an ocelot sighting is reported.
Posted by Mike at 8:40 PM