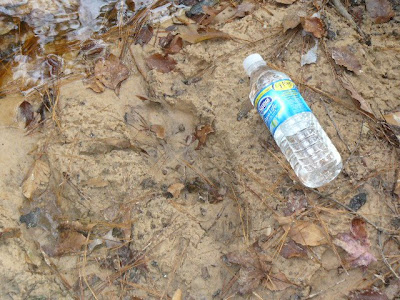 I just finished watching the MonsterQuest Swamp Stalker episode. All in all, I was pleased with how it turned out. I thought all the researchers were presented in a positive light and that the show did a good job of explaining the various techniques used to search for the sasquatch-like creature that has been seen for decades in the Ark-La-Tex-Oma area. Also, I truly appreciate how the subject matter is taken seriously and how evidence that is collected is critically analyzed. Having said that, I do think there was room for improvement with this episode.

I suppose my first criticism would be that the MonsterQuest producers tried to cram too much information from too many different areas into one episode. The two research teams were 75-100 (though the narrator said 250) miles apart. In my opinion, if the episode was to focus on the “Fouke Monster” or “Swamp Stalker” that is where the teams should have been looking exclusively. There are plenty of good areas to search in and around the Sulphur River bottoms. Instead, the second group of researchers was sent far north into the Ouachita Mountains. In addition, the sighting of TBRC researcher Daryl Colyer was included in this episode. This incident occurred far to the South of the Fouke area along the Trinity River in southeast Texas. Also, the show featured the discovery of a set of large footprints and a handprint along a creek in southeast Texas. Plaster casts were taken and evaluated by Dr. Jeff Meldrum of Idaho State University. This is all well and good but, again, this evidence was collected far to the south of Fouke. While I have no doubt that the same type of creature is responsible for the sightings in all three of these locations, I do believe the show would have been better had the producers zeroed in on one location only and done a truly in depth investigation.

The second thing I was a bit disappointed in was how the encounter of the bow hunter was glossed over. I have heard him recount his story in person and it is absolutely incredible. I don’t believe it was given the attention it deserved. There was also a discrepancy in how the story was depicted on the show and the report the hunter filed with the TBRC. The narrator said the encounter occurred in “broad daylight”. This is not the case. According to the hunter, the incident occurred prior to dawn while still dark. There was a large full moon out, however, that allowed good visibility. Also, the hunter described seeing two animals beneath him. This was not mentioned on the show. I believe these errors fall on the MonsterQuest producers. I’ve talked to this man myself and heard him recount his story several times months apart. His story has always remained the same. Never once have I heard him say the encounter occurred in broad daylight. You can read the actual report submitted to the TBRC here. I believe that the lack of detail presented was a decision made necessary when the producers decided to include material from too many separate areas in this one show.

I found much to like about this episode as well. I mentioned in a previous post that I had been invited to participate in the filming of this episode but could not due to my work schedule. It turned out that I got to have a hand in this episode after all. I was present on the 2006 TBRC investigation that yielded the footprint and handprint castings featured on the show. I actually took the photos of TBRC investigator Daryl Colyer pouring and pulling the plaster castings as well as the photo of the creek and surrounding area (I have posted one photo above and two photos to the right). It was exciting to see Dr. Jeff Meldrum examine evidence that I helped collect.

While it is easy for me to say, I think that MonsterQuest would have been better off making a separate episode for each of the three areas discussed and/or investigated on this show (the Fouke, Area, the Ouachita Mountains, and Southeast Texas). There is plenty of historical background, local folklore, Native American legends, newspaper accounts, and modern sightings in each of these areas to fill up a one hour episode. I hope that these episodes will be produced and aired one day.

I will post an entry at a later date recounting the details of the 2006 investigation that yielded the footprint and handprint castings.
Posted by Mike at 10:46 PM