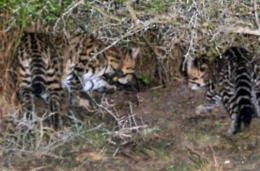 To the left is a great picture of a mother ocelot and her kitten taken by a camera trap in the Laguna Atascosa National Wildlife Refuge in South Texas. Here is a link to the article describing how this photo was obtained. Ocelots are one of the rarest species in North America. They are extremely shy and elusive. It is thought that there are only 100 or so left in the U.S.

What does this have to do with the sasquatch? Camera trapping has become one of the main methods amateur researchers are utilizing to try and capture a photo and/or video footage of a sasquatch. The cameras are set out in remote locations and can be left for months before the batteries have to be refreshed. There are a wide variety of cameras out there ranging in price from around $45.00 to as much as you care to pay. Upper end models can go from $400.00 to $700.00 each. Most of the people who are out trying to document these animals are "weekend warriors" who are unable to be in the field for long stretches of time. The cameras act as the ears and eyes of the researcher 24 hours a day 7 days a week. The cameras are not deterred by hot summers, cold winters, mosquitoes, snakes, or darkness as humans can be. It is hoped that one of these cameras will capture the image that will prove the existence of the sasquatch once and for all. It is a reasonable hope, as the practice of camera trapping has proven very effective in capturing images of other rare/elusive animals. The list of animals "trapped" includes the Sumatran rhino, the snow leopard of the Himalayas, the ocelots shown above, and many others.

One of the drawbacks to the use of camera traps has been that many of the "weekend warriors" previously mentioned take their camera traps out in the field with them for a few days then load them up and take them home when they leave. This is understandable, to a degree, as the cameras are pricey. However, it severely hampers the chances of capturing the photo we all long to see. The cameras simply must be in the field continuously for as long as it takes. In that vein, the Texas Bigfoot Research Conservancy (TBRC) has undertaken an ambitious camera trapping effort called Operation Forest Vigil. You can read about the project here in greater detail. I can personally attest to the fact that these cameras are in some of the most inhospitable and remote regions of Texas, Oklahoma, Louisiana, and Arkansas. I think these cameras give us as good a chance as any of capturing a photo or footage of a sasquatch.

As the photos of these ocelots prove, camera trapping is an effective and viable way to capture images of rare and elusive species. It is also a great way to be “in the field” even if you can’t be in the field. Camera trapping, in my opinion, should take its place alongside other methods of research in the quest to document this species.