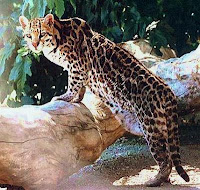 Those of you who follow such things have probably already read that a rare ocelot has been photographed in Arizona. The photograph once again proves the validity of using remote cameras or camera traps as a legitimate research tool. You can read the full story as it was originally printed on the Sky Island Alliance website here.

The ocelot photograph was snapped in Cochise County, Arizona by a game camera belonging to the Tucson-based conservation group Sky Island Alliance. The group has set out multiple cameras in the Sky Island region of Arizona along wildlife corridors in the hopes of capturing photos of rare wildlife. The project is part of the Witness For Wildlife program sponsored by the Freedom to Roam Coalition and the Patagonia Outdoor Clothing Company. Volunteer members of the group retrieved the images from a camera placed in a remote location. The photograph of the ocelot was dated November 7, 2009.

This is the first time an ocelot has ever been documented in Arizona. The area where the cat was photographed is at least a couple of hundred miles farther north than would be expected. Ocelots are native to northern Mexico and south Texas but have become increasingly rare in recent years. The discovery of this cat in Arizona is as exciting as it is surprising.

Once again, the value of remotely placed camera traps has been proven. The chances of a human seeing and photographing this ocelot were practically nil. Camera trapping is a tremendous tool in efforts to document what species are inhabiting certain areas. It is my hope that, as more cameras of a higher quality are placed in remote locations, we will make some amazing discoveries.

I believe we are going to continue to be surprised...
Mike at 11:50 AM
Share